Veera is very badly injured. She has been taken to hospital and is fighing with death. Jaane nahi dengy tujhe song plays.

Reporter says, even in this state veera is concerned about her veer ji. She is worried for his singing career.

Off-screen veera says, I don’t wanna tell Veer ji about my accident as his voice will chock in singing. His concentration will be disturbed, he will try to come here leaving contest and I don’t want this.

Reporter says, Sister should be like veera who can give her life for her brother.

Off-screen baldev says, I was there when accident happened to veera but I was at a distance from her so I couldn’t save her. I have taken her to hospital and I am so worried for her.

Reporter says, Veera was going on a date with baldev but she was hit by a truck and now she is fighting for life.

Off-screen veera is enjoying the shoot and is applying fake blood on her face.

Baldev and veera jkes. Veera says, I have lost my memory and ask baldev who is he. He says he is Sarpanch of this village. Veera says oh yes, you are baldev who was taking me on date and accident happened. She beats him and says do he think, I am a fool.

Reporter says Arzoo is fed up of working as fashion … 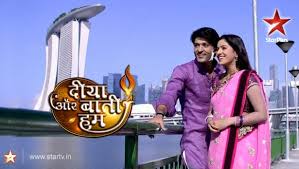 Reporter says, Sandhya is distributing gifts in family as Diwali …