Reporter says, veera is one but lovers are two, girl is one but guys are two. the match to win Veera has intensified, one side is Baldev and other side is Rajveer.

Reporter says, these strong guys have come in ground aganist each other, both are desperate to goal, they can do anything to make other lose. One is lion of village and other is king of village. Veera is cheering for Baldev.

Reporter says, both are doing goals. Off-screen Veera says, don’t make this match a bet, play it, I will be with Baldev even if he lose, Baldev says but still I will make him lose.

Mahira knows she is going to get married to Amaad, … 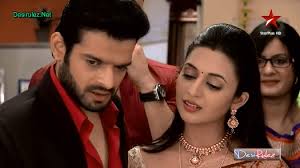 Raman and Ishita are fighting over the gas. Ishita tells …