Reporter says Rishabh and Kiara are dancing. Raina takes their photos. Kheench meri photo piya…..plays…… Raina clicks their pics and shows her talent to Rishabh. Kiara asks Raina to click their pics. Kiara and Rishabh’s engagement is fixed. Offscreen Rishabh says I feel I love Raina, but I know Shivam entered her life, so he tells his dad that he is ready to marry Kiara. He is confused and feels Raina has left him for Shivam.

Raina feels Rishabh is Bewafa and left her for Kiara. The family is happy and celebrating. They all dance. Raina gets hurt and falls. Before Rishabh could go to her, Shivam reaches her to help. Rishabh gets angry and goes. Rishabh did not think Shivam will reach her and take his place. Reporter says Rishabh’s heart broke. We have seen the team masti on sets. Keep reading. 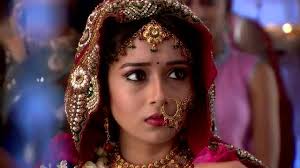 Meethi does ritual of Karwa chauth, she sees moon from …

Reporter says Sumi slips by the water on the floor …