Meera is sadly sitting, Kokila tries to pacify her but Meera is lost, women drape white saree around her, Gopi cries seeing it.

Reporter says, Dharam is alive but not seen on screen, his family are preparing for his last ceremonies, Meera blames herself for Dharam’s death and wants to fulfill rituals of widows. On-screen Meera argues with Gopi. Reporter says, Gora has suggested that Meera wear white saree and shave her head, Gopi is against Gora but Gora argues with her and says Meera killed my son and atleast she should last rituals or Dharam’s soul to rest in peace.

off-screen Gora says, I wanted to trap Meera so that she performs all rituals and I did make her do it. Meera says, that i am very modern in serial but rightnow Meera is in trauma of Dharam’s death and is ready to follow all rituals of being widow.

Reporter says, Meera is not listening to Kokila and Gopi, gora have called her women in house who are not allowing Kokila’s family to come near Meera.

Roshni is dancing in high spirit. She has got her … 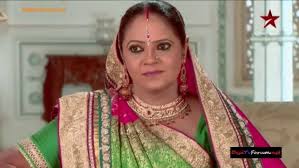 Kokila has got a cardiac arrest. Ahem is on the …