Aahil and Sanam are seen romancing and sharing an intense eye lock. Ishq Bulawa Song plays……Aahil feeds her apple pie. Sanam makes him eat apple pie with her hands. Reporter says, Aahil wants to confess his love to Sanam and wants to flow in her love. He wants to embrace and hugs her.

Aahil says, Sanam is very clever. She mixed some churan in my apple pie. Reporter says, well said, they are looking in a poetric mood. They played antakshiri. Sanam sings Pyaar Me Goli with Aahil. Reporter says, everyone will want to be chumantar hearing your lovey talks.

Aahil and Sanam dances on the song Chumantar…………The scene is beautifully shot. Aahil says, every good looks is of Sanam. Sanam says, he is handsome in his mom’s eyes and gives killer looks. Reporter says, they enjoyed the photo shoot after the scene is shot. Sanam says, Aahil have a crush on candy.

Reporter asks them to have full stop on their romance for time being as someone’s bad eye is on them. Tanveer looks angrily while they romance. Keep reading.

Kamiya comes to her mom and says you have played … 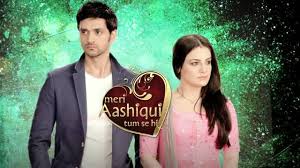 Ranveer and Ishani get married. He makes her wear the …