Though Surbhi Jyoti is not a part of “Ishqbaaaz”, she shares a strong bond with actress Surbhi Chandna, who plays Annika’s role in the TV show.

Though Surbhi Jyoti is not part of “Ishqbaaaz”, she shares a strong bond with actress Surbhi Chandna, who plays Annika’s role in the TV show.

When Jyoti got to know that her “Qubool Hai” co-star had bagged a pivotal role in “Ishqbaaaz”, she bought her bracelet with the letter ‘A’ customised on it. Chandna got so impressed that she decided to wear the bracelet onscreen.

“When the news of me being finalised for ‘Ishqbaaaz’ broke, Surbhi was extremely glad and wished success for me. She consistently was insisting that let’s go for shopping as she had a surprise for me,” Chandna said in a statement.

“She took me to a jewellery designer and got me a bracelet with the letter ‘A’ customised on it, as she was aware of my character name in the show. It was a very sweet gesture from her side.

“When I showed Gul ma’am (Gul Khan, producer of the show) the bracelet, she insisted that I should wear it in the show too as it was very funky yet beautiful — which goes with my onscreen character,” she added.
“Ishqbaaaz” aired on Star Plus, tells the story of three brothers – Shivaaay (Nakuul Mehta), Omkara (Kunal Jaisingh) and Rudra (Leenesh Mattoo). 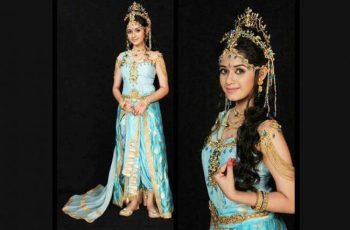