Tanuja dislikes her new face, post plastic surgery and decides to destroy it!

How, we wish life was as predictable and convenient as portrayed on our TV daily shows! Where we could change the face and fate of characters around as per our sweet will…
As the current track of Kasam Tere Pyaar Ki revolves around Tanuja’s accident drama, Rishi, who has been going through a lot of emotional turmoil recently assumes that Tanuja is dead. He decides that its time to move on and shaves off his beard. He is under the impression that Tanuja succumbed to the flames and decides to let his past go and begin a new journey. Little does he know that his past is soon going to come back and haunt him!

On the other hand, doctors take a call to give Tanuja a new face as her face gets severely damaged due to the burns. So out of all the faces in the world they choose Tanu’s (Kratika Sengar) face, without even taking anyone’s consent as they find her picture in her hand. (wonder how the picture survived the deadly flames!)

The real drama begins when Tanuja wakes up after the surgery and realizes that she looks completely different. No one will recognize her and she will be shaken by this fact. Unable to accept this change, she would then try to harm herself as she doesn’t like her new face! However, a nurse will barge in and stop her from doing the same. She also briefs Tanuja about the procedure and tells her that it was essential to save her life.

What will Rishi’s reaction be when he sees Tanjua with Tanu’s face? Only time will tell! 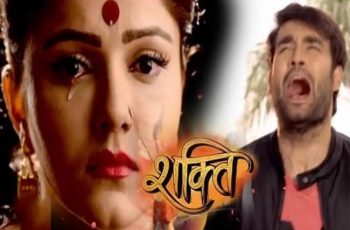 Roli stabs Maya with a trishun and she falls of …